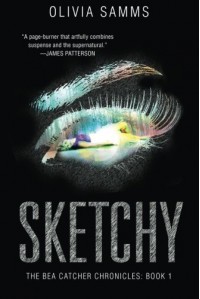 First and foremost: I won this through Goodreads First Reads, and I would like to say thank you to Goodreads and the author for providing me with a copy of this book to review. I always feel funny when I get a review copy of a book and I don't particularly love it. But I promised a fair review, so that's what I'm posting.

In my opinion, the concepts in this book surpassed their execution. I liked the idea of a main character that can literally draw the truth out of people. I also liked that the book set out to address teen drug use, rape, and bullying. And I was excited to read a book with a biracial protagonist and a gay secondary character. Unfortunately the delivery on all of these elements left something to be desired.

The characters, and the high school in general, felt stereotypical to a degree that I found myself cringing in parts. The football players say "hut hut hut" as they do bleacher runs and tease "the homo", the gay friend seems to mostly be there to admire the main character's fashion sense and be flamboyant, and the only thing that seemed to differentiate Bea as biracial was her afro like hair. Yikes. There was also a bit of an ick factor in that 17 year old Bea's romantic interest is an adult police sergeant (which I wouldn't have been bothered by if it had been unrequited).

I will say that the pacing was there, and I found the climax apropriately page-turning. It was a fast read and it kept my attention. All in all, more polish and realistic detail replacing cliches would have improved this story enormously. I think this author could become someone to watch in the future, but this first novel just isn't quite there yet.