The Killing Moon: aka meditations on dreams and dying 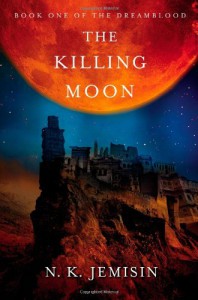 I have a complicated relationship with this book. It's the first book I've read after losing my mother to a rather horrible and drawn out death process. That alone would make my interactions with this book unique. Now add in that a large part of this book centers on death, ideas about dying, and the philosophical arguments around euthanasia, and...like I said: complicated. That makes it hard for me to objectively rate or review this one. I'll give it a try and do my best.

The first thing I should say is that the world building and writing were exceptionally rich. Jemisin has a way of fleshing out her book's culture and world with a few well chosen words rather than long exposition. The pacing didn't suffer or lag even though much of this book is somewhat lacking in traditional action. It is lush rather than flashy. On the flip side I found the characters, though refreshingly believable, fairly one dimensional. Even by the end of the book I didn't feel any real emotional connection to them. Part of that is due to the fact that most of the main characters are trying so hard to reign themselves in that their responses become practiced rather than genuine. They are more like representations of roles rather than individuals. All in all I'd recommend this to people who want to try a fantasy that is focused on mythology (especially if Egyptian myths are of interest), politics, and morality. It's a nice departure from the more traditional swords and sorcery that dominate much of the genre.