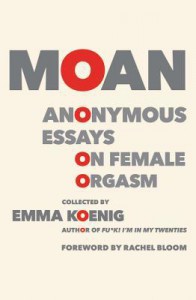 Was this book occasionally repetitive? Sure. Did I find it fascinating anyway? Absolutely.

As with any essay collection there are going to be some pieces that are better than others (and this is no exception), but what makes this collection so interesting to me is the sheer volume and the way the voices both echo and contradict one another. With each essay around two to three pages in length (a few are longer, but this was pretty consistent average) there are a lot of perspectives in here. I find it interesting getting to hear women speak anonymously, and thus totally honestly, about their sexual experiences. There are plenty of pieces in here that are basically just women relating what works for them in the bedroom, but there are plenty more about what *doesn't* work, first experiences, ruminations on femininity, how things have changed for them, how they feel different, or just how they feel in general. These aren't stories you often get to hear, and even when I couldn't relate (although there were a few where I very much could) I was interested.

My biggest critique would be the apparent lack of variety in the essayists. Its hard to be sure, since it is anonymous, but the contributors did seem to come from fairly uniform backgrounds, which could have been improved. I'd have liked to have read more essays from queer women, assault survivors, and various age groups. There are essays from all of those groups, but not nearly as many as there are from 20-something college educated women. I suspect this is because many essays were collected online.

The foreword talks about how sexuality is part of what makes us human, and by denying women their sexuality we deny them the ability to be fully human. I truly believe this, and this book put a very human voice to the varied world of women's sexual experiences. A great book for anyone interested in sexuality, regardless of gender.