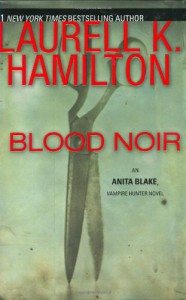 Once upon a time I loved this series. Then it changed, and I drifted along hoping it would change back, and eventually I rage quit the series entirely. Now here I am several years later, and I found myself wanting to revisit the series. Rather than going back and reading old favorites I decided to forge ahead since this book promised to feature my favorite side character. I figured if I went into things with my expectations adjusted it might be okay. And it mostly was.

I actually enjoyed returning to this world, and hanging out with a few of my favorite characters of yore. Is it the series it used to be? Not at all. But since I knew that going in it wasn't a disappointment. I will say this book actually had a plot, and conversations, and not just sex, so that helped. It didn't hurt that the menagerie of lovers and characters were all left at home as Anita and Jason go off on their own. Narrowing it down kept things on track. All in all this was the fast fun read I needed right now. Anita might have morphed from a kick ass executioner into a steamy succubus, but knowing that from the start meant it didn't lose any points for me.