Kitty in the Underworld - Kitty #12 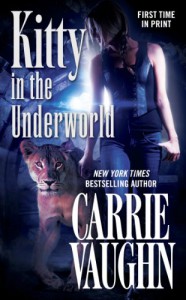 I'm noticing an odd trend with me and the Kitty series. I seem to really like every third book. It's sort of like the Star Trek movie thing (even numbers = good). I have no idea why, but this book did not break the trend.

Kitty in the Underworld brought the focus in on a very specific plot, and that narrowness was a boon to the story being told. The bulk of the book takes place in the confinement of the mine, and I thought Vaughn did a great job conveying the claustrophobia of the setting and the situation. (In fact, it could even be triggering for surviors of trauma - I myself was not triggered, but I thought she absolutely nailed a lot of things that could be upsetting for some.)

In addition to the main plot Kitty also tells us a lot of stories. Mythology and folk tales are abound, and the story itself mirrors some of those underworld tales. It was deftly handled, and this will be one of those books in the series that will stand out all on its own rather than blending together as many of the others do for me. Well done, Carrie.