All Systems Red: Or, the day in the life of an introverted media-junkie Murderbot 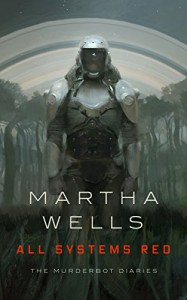 This book was highly recommended by a couple people I trust, so I was expecting to enjoy it. I was not, however, expecting it to be one of my favorite reads so far this year. This novella was so much more than I hoped for. This is hard sci-fi with a gooey heart filled center (much like the Murderbot itself).

The titular Murderbot was designed as a security unit, but has gained self awareness and individuality. When it hacked its security protocols to gain autonomy it didn't go on a murder rampage - instead it educated itself and became a media junkie. Murderbot is supposed to protect its clients, and it will, but it would really rather be left alone to watch serials. Interacting with humans is awkward and stressful, and when it comes down to it Murderbot just wants to be left alone. (I might relate to Murderbot a little too much sometimes.)

If you look at the cover and title you would not expect this book to be funny, but I found myself laughing out loud numerous times. Murderbot's voice makes this book for me. Told from Murderbot's POV this sci-fi mystery is also a story about self discovery and the bonds we form (or do not form) with those around us. The world building was subtile yet rich enough I could imagine how this culture functioned as well as the technology being used. I loved the sci-fi and action, and I also loved the dialogue and character. While the secondary characters tend to run together a bit, especially in the beginning, that felt like an authorial choice due to Murderbot's POV rather than a misstep. I was invested in the outcome for all involved, which kept me turning pages.

All in all I loved this novella, and I'm so happy there will be another one. If you've been hunting for a fast sci-fi read with a protagonist that's one of a kind, full of snark and world weariness that's actually earned, you need to read this book.