Borne: Or VanderMeer cranks up the weirdness even higher 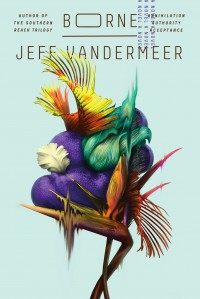 It is really difficult to review a book like this one. If you've read any of VanderMeer's Southern Reach trilogy then you already know his books are weird. This one is even weirder. I'm going to do my best to write this review without giving anything away, which may be difficult, but I think the less you know about the specifics of this story before diving in the better.

The world building in this novel is extensive, even though most of what you know is pieced together through subtle clues and guesswork. The landscape you live in while immersed in this book is distinct, striking, dangerous, toxic, intriguing, and claustrophobic. Populated with biotech, mutated murderous children, poisonous rivers, a decaying city, and an enormous flying bear and its lethal proxies. This is not a world anyone wants to live in, including the characters.

Ah yes, the characters. One thing VanderMeer excels at is writing an unreliable narrator that is realistic and intriguing rather than frustrating. Every character in this book has secrets and is hiding something. No one fully trusts each other. And yet, this feels right rather than contrived. The plot and arc of the book is slow paced and builds on revelations about the characters (though there is some action). Without giving anything away I will say that each of the three main characters has a character arc, and each of those arcs concludes in what I found a satisfying manner. This book does have a very definite ending, unlike some of his other works.

My only reason for not giving this book higher marks is entirely personal. This book made me feel something, and for that it has my respect. Unfortunately, it mostly made me feel trapped and full of dread, which isn't something I particularly enjoy. On a technical front this book gets full marks - VanderMeer is an amazing writer. But on a personal front I just couldn't wait to escape from this world. When I finished it was a relief. Do I recommend this book? Yes. Absolutely. Especially if you enjoyed his other work but want something with a more concrete arc and ending. I think this is my favorite of his works. He did a great job building a horrible place. Such a good job, in fact, that it was hard to pick the book every night and live there for a time. I applaud that.