Caraval: Or Magic and lies in the most deadly carnival game ever 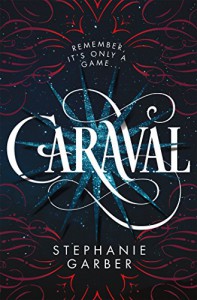 This was exactly the right book at the right time - after a string of books I couldn't quite latch onto, Caraval came to the rescue in brilliant sparkling glory.

There have been numerous circus/carnival themed books in recent years, and some of them are better at evoking a sense of wonder than others. This one absolutely nailed it. While it never gets quite as rich and detailed as a book like Night Circus (but really, what does?), it does bring about a sense of joyful whimsy like falling down a rabbit hole. The world felt vibrant and magical, and reminded me of the first time I read about Hogsmead in Harry Potter - both very real and very wondrous at the same time. Garber also writes using lots and lots of color, both in describing the world and in describing emotions, which gave the book a beauty and brilliance that made it stand out.

None of the characters in this book are quite what they seem, as all of them have hidden agendas or desires they keep to themselves (even the main character does this, though she isn't fully aware of it). The nice side of this is there are plenty of surprises and time spent wondering what characters are hiding. The down side is that there are constant "shocking reveals" and the subsequent emotional turmoil that you see in many teen books. I really dislike plots that are driven by characters failing to talk to each other, but in this case it all made sense, though did occasionally get tiresome. The romance is genuinely romantic and I was invested in it, but due to all the secrets it had that rollarcoaster up and down "he's the best, no wait, he's the worst" quality so many teen reads go for. If it seems like I'm being critical it's because this was really the one element of the book that held it back at all for me. This likely won't be an issue for many readers.

One last note that I haven't seen covered in many reviews: one of the core themes of this book is abuse. The sisters come from an abusive home (you find this out in the first few pages), and that abuse colors all of their actions and perceptions. I thought Garber did a really good job portraying some of the ways that can shape a person. One sister is a risk taker, and a schemer. The other sister doubts herself and others, and always plays it safe. They are very different, but both of them interact with others and the world around them based off of their experiences at home. While it was occasionally hard to read about I really appreciated this subject being approached the way it was: with a plainness instead of sensationalism, and an insight that lent it depth and credibility. Very well done in my opinion.

While it may sound heavy after my last statements, Caraval is anything but a depressing slog. It's fast paced, magical, romantic, and adventurous. The setting pops off the page in brilliant color, the characters are sympathetic and I found myself cheering for them, and the story was a colorful journey through a world of magic and lies that kept me turning pages after my bedtime. If you need a reprieve from the winter blues this book is a shot of sunshine.

Caraval is available in bookstores January 31st of 2017.