Martians Abroad: Or a pretty standard boarding school mystery, with some space flavoring 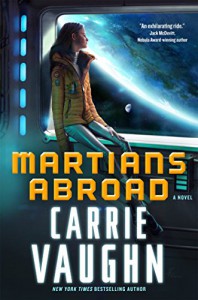 I really love Carrie Vaughn, and sci-fi, so when I heard her first big project post-Kitty was a classic sci-fi I was beyond excited! And there's lots to like about this book. Vaughn's geeky roots are showing, and it is a delight for someone like me who is also a huge space nerd. She clearly devoted a lot of thought and research to the science and details in this book. What it would be like to live on Mars. What interplanetary travel might be like. What Earth would be like for someone who grew up in a place like Mars or a space station. It was a really fun thought experiment, and this was the part of the book I enjoyed the most.

Unfortunately there was a down side for this book for me, and it was in the story itself. The plot is barely present. Very little happens in this book to move the action forward. Most of this book feels like a thought experiment that had a story wedged into it, and it moves slowly as a result. While Polly was a fairly developed character most of the supporting cast, including her brother, are barely sketched in. In order for me to love this book wholeheartedly it would probably need to be about twice as long to add in more character and plotting, and move twice as fast by adding more plot movement and action.

Here's the thing, I love the way Vaughn wrote about space, but I didn't love this story. In an ideal world I find myself hoping she writes an epic space trilogy. I know she's got the chops, and that would be something I'd love to read. For now I'll just wait and see what she writes next, and hope it flows better for me than this one did.