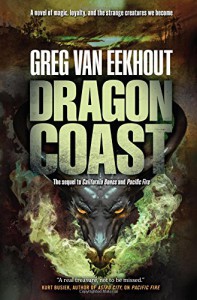 Dragon Coast was the third installation in the Daniel Blackland series, and it brought the trilogy to a satisfying conclusion. The story the second and third books focused on was wrapped up, but the book was left open ended enough that I wouldn't mind returning to this world and these characters again in the future. High points remain setting, voice, and character - all consistently engaging throughout the series. I also enjoyed the continued themes of fatherhood, which have run through all three books and seem to come to a head within this one. We also get some fun action and a return to some of the more heist roots established earlier in the series.

The downside of this book was that some portions were far more interesting than others. Without giving out spoilers I can say this: with the cast of characters split into groups I found myself far more invested in some of the story lines than others, and I got the feeling Van Eekhout felt similarly since a few of them seemed to resolve themselves very simply or failed to really coalesce. (Max and Gabriel remain far more compelling than they have any right to be. Sam significantly less so.) There are some interesting and shining moments to be found, but the connective tissue is somewhat lacking in this one. I forgive it because the former two books did so much heavy lifting, but I can't help but feel this book needed more time on Van Eekhout's desk percolating and revising. Simply put: it was good, but not great. Don't let this dissuade you from reading though. This is by far one of the better series I've discovered in recent years, and Van Eekhout has earned my loyalty for future releases, whether set in this world or another.