All You Need is Kill: Or Groundhog's Day meets Starship Troopers 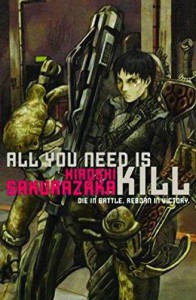 After finishing this book I found I really had very little to say about it. I thought attending my book club might help, but not so much. It seems most of us had little to say about it, regardless of our various levels of enjoyment. I found this striking considering there seems to be a lot of interesting themes in here to dig into. Yet, are there? Ultimately the ideas in this book seem to be overshadowed by some clumsy narrative choices.

Here's the thing: I thought the first half of this book was far more interesting than the second half. The war scenes were well done, and the repeating days were written well enough they were convincing while not being dull. Keiji's gradual distancing from the people around him, and even his own life, was realistic and intriguing. And the brief description of the origin of the aliens was really interesting to me (probably my favorite part, honestly). Unfortunately, the book then swerves in the direction of romance, exposition, and clumsy character development and never fully recovers.

A side note about character, or more specifically the female characters: I found the treatment of women in this book problematic. Every woman's description included something about her breast size, and their portrayals were flat and uninteresting. The women exist solely as objects of desire in one fashion or another. It feels very anime, and not in a good way. It only gets worse when Rita goes from being a mysterious and powerful figure in the background to the focus of romantic tension. It's disappointing, and somewhat jarring tonally.

This is going to be one of those weird cases where I thought the movie was better than the book. Judging by the ratings others have given this one I seem to be in the minority, however, so your milage may vary. If you want some quick and dirty action, without much real depth, this might do the trick for you. If you're hoping for insight, or rich characters, you might want to give this one a miss.