The Girl from the Well: Or, the ghost from The Ring has feelings too 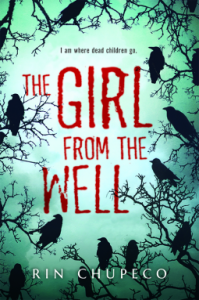 When the leaves begin to fall, and I flip my calendar to October, I bust out the spooky books. Some people have pumpkin spice, and I have creepy books. After hearing so many good things The Girl from the Well was at the top of my stack this year. Perhaps it was because my expectations were so high, or maybe it was the fact that I read an ARC that was in need of editing, but whatever the reason I didn't utterly fall in love with this one the way I thought I would. It was enjoyable, but it never really stole my heart.

The structure of this book is both a boon and a curse. The POV really needs work, as it skips from 1st to 3rd sometimes mid-paragraph. At times this was effective, and at other times it was just needlessly confusing or stilted. What was working, and made the book interesting, was that the murderous ghost (straight out of Japanese horror pop culture) is your POV character rather than the human characters or the victims. It's a fun take on the traditional ghost story, which added some freshness to a story that often felt very familiar.

Another interesting structure choice is how the book almost feels divided into two stories: what happens in America, and what later happens in Japan. The two sections have really different tones, and it almost felt like two separate books stuck together.

<mildly spoiler ahead> In America we meet the cast of characters and thwart a serial killer. In Japan we take what we've learned so far, and basically work toward an exorcism. <end spoiler bits>

The inclusion of Japanese culture and mythology was fun, and would likely be really interesting to people coming to it fresh

All in all I enjoyed the flavor in this book much more than the characters (pretty stock) or the story (pretty predictable). It was a fun and fast read, but nothing spectacular or game changing. If you want a quick Halloween read, and you're interested in learning more about Japanese ghost lore, this should hit a sweet spot. Just don't expect anything super scary or revolutionary.