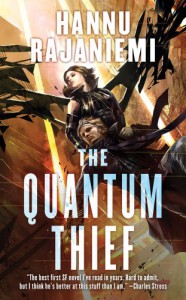 I honestly don't know what to say about this book. There was so much going on, so many ideas, and so little hand holding that it was a bit like being chucked into the deep end on the first day of swim classes. It's disorienting, and you take on some water, but it's a totally new experience and that too has value. It's been a while since I read some true hard sci-fi, and my brain is a bit out of practice at having to stretch and infer so much. That's my shortcoming, to be sure, but it was the sort of read where I'm still unclear on a lot of what I read despite my best attempts at close reading. This is crunchy, made-up words every other sentence, bursting with speculative science sci-fi, with all the perks and pitfalls such a work generally has. You get brilliance and newness along with the hard work. The best foothold I could get was that this book also reads a lot like a mystery caper (which I also don't read) and has some similar tropes and pacing. An intriguing blend to be sure. It's much more setting and idea driven than character, even though the characters get plenty of spotlighting. I will say I'm glad I read this book even though I had a hard time getting into it. Not sure what else to say beyond that.