The Superior Foes of Spiderman #1: Getting the Band Back Together 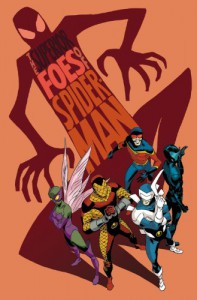 I'll admit I was dubious about this title, but after seeing so many positive reviews I decided to give it a fair shot. The first thing you should know is that Spiderman is not in this book. This book is about a bunch of two-bit villains repeatedly failing, and generally just being the worst. The second thing you should know is that it's funny. The hassles of being a villain, like court dates and bail costs, take center stage over any epic battles. It's tongue and cheek, irreverent, and filled with people that will charm you despite the fact they are just rotten. If you know nothing, to very little, about the Marvel universe you can still read and enjoy this title. You might miss out on some of the references and Easter Eggs, but at its core this book doesn't require you to know anything about continuity or the many tangled plot lines and myriads of people populating Marvel. It's just a book about losers, and that is its charm. If you've been enjoying the work of people like Matt Fraction, or just want to read a fun book highlighting the perils of villainy, give this one a try.