Ammonite: Or Women are People Too 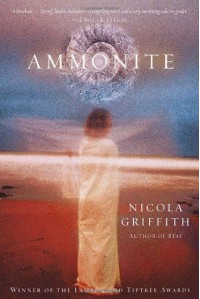 This is one of those frustrating books that is loaded with potential, but ultimately falls short of greatness. Griffith sets out to write a book portraying women as people, rather than as some sort of two-dimentional alien creatures. (I know this is her goal because she states as much in an afterward.) The tone of the writing has a similar quality to Marion Zimmer Bradley, and Anne McCafferey - its that distinct quality of voice that late 80s feminine sci-fi can have, that I haven't really found elsewhere. It took me back to my younger years, exploring the genre for the first time. The writing was solid, the world-building was descriptive and lush, and the stage was all set to be sheer brilliance. For the first quarter of this book I thought it might become a favorite. But as the book continued it became clear that Griffith wasn't going to dig as deeply as I hoped she might.

There is an opportunity here not just to show that women are as complex and varied as men, but to also explore the differences between the two conflicting cultures portrayed in this book. The natives (for lack of a better word) have lived without men for hundreds of years. The newcomers recently lost over half of their compliment, and all of their men. There is an opportunity to compare and contrast these people and their cultures. There is also an opportunity to explore grief. The newcomers have lost the lives of colleagues, friends, and lovers. The natives are losing their old viewpoints, and in some instances, their way of life. And Marge has recently lost her mother. These are some fantastic themes, and they either fall by the wayside, or in some cases are never even touched. There are many more threads throughout the book that I expected to come to fruition that are dropped, and some that are left dangling at the end as though expecting a sequel. I was consistently disappointed by what fell by the wayside.

So ultimately the question becomes whether or not Griffith delivered on her goal to paint realistic and human women. After all, she passed up so much fertile territory to get where she wanted to go - did it pay off? And that is where I'm not really certain I can say either yes or no. While this book is entirely peopled by women, and they are all varied in their motives and morals, I never really felt any of these women were fleshed out more than at a very surface level. There was so much care taken to avoid tropes, cliches, and other pitfalls with these characters that many of them felt flat, and most felt very simplistic. Ie: This is the character that is lively and reckless. This is the one that is serious and stoic. This is the one that hunts. This is the one that sings. Etcetera. None of them felt like living breathing people. Marge, the main character, did get considerably more development. Unfortunately, the farther the book progressed the more I disliked her. The book however, and those around her (including herself), seemed to find her remarkable despite her actions often showing us the contrary.

Okay, so it sounds like a pretty grim review. I know. Here's the thing though: I did enjoy it. I think if I had read this when it came out I would have had a very different experience. It is well imagined, and uniquely feminine (some times to better effect than others). I think this book suffers from 1) not aging as well as it might, and 2) being Griffith's first book. I think if she were writing it now, from a more seasoned place, this book would be brilliant. It's for this reason I want to read some of her later works. So do I fully recommend this one? Not so much, even though I am glad I read it. If you can approach it with the right mindset, that this is very much a work of its time, written by a young author, you might really enjoy it.